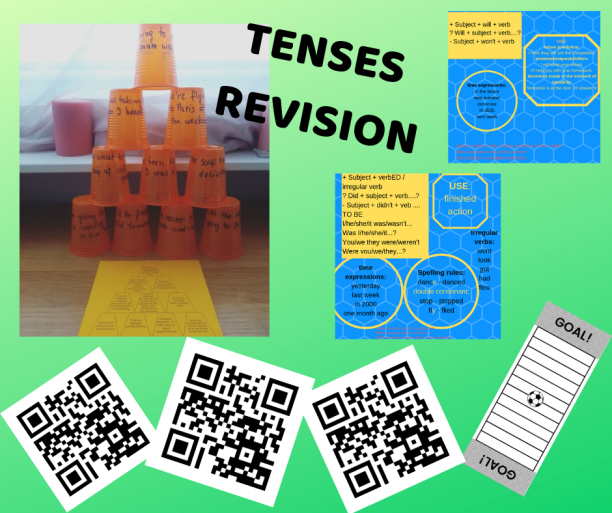 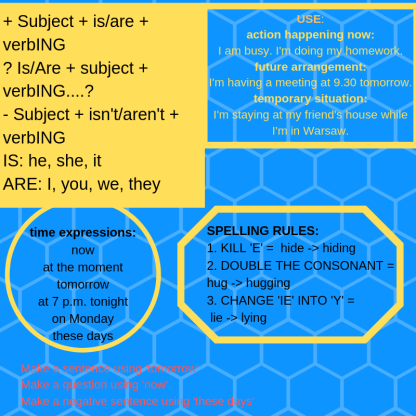 B: it’s a place where you feel relaxed

Plik do pobrania: A or B 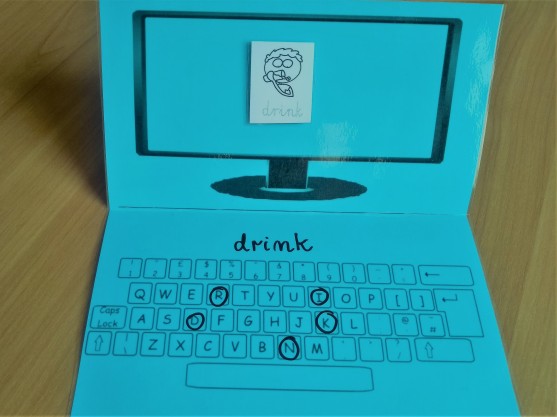 READ IT, BUILD IT, WRITE IT 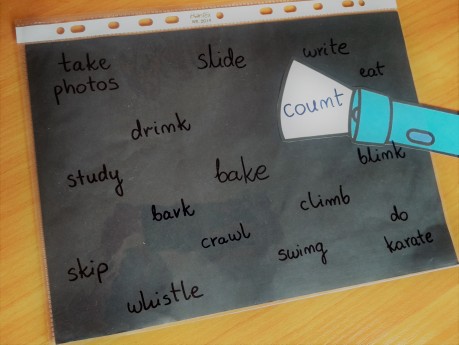 FOUR IN A ROW 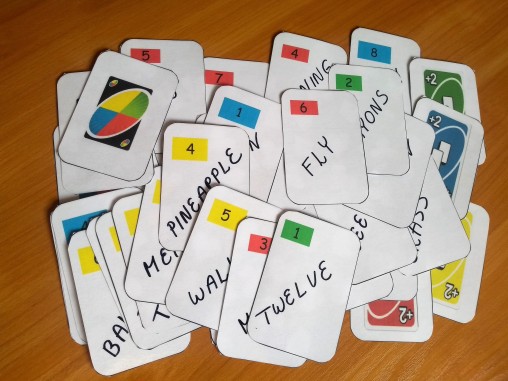 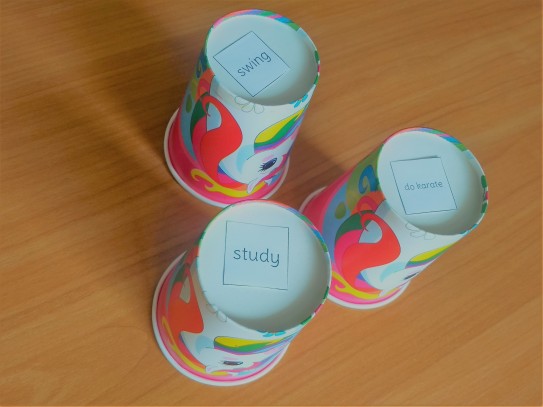 Give an opinion – warm-up 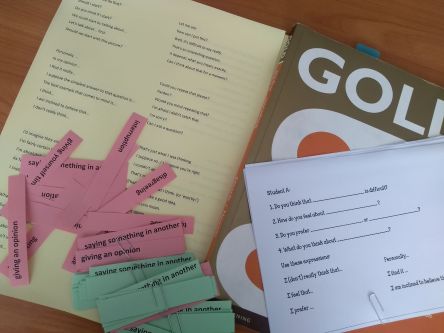 a, an, the – rules and examples 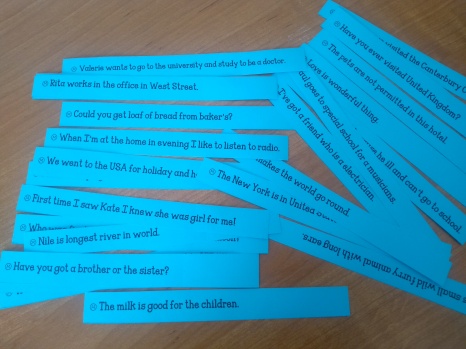 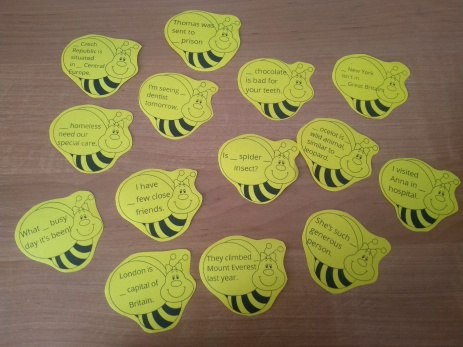 As soon as I found out that I’m gonna teach the alphabet and spelling with one of my groups, I started searching the Internet for various ideas, games and activities and now I want to share all these ideas with you.

Prepare laminated eggs cliparts. Write letters on the other side with a dry-wipe marker. Split Ss into two teams. Ss sit opposite each other. Two first Ss hold paddles to turn the eggs upside down. Then the 1st S have to say as fast as possible his opponent’s letter.

Ohhh I found those super extra cute Disney alphabet cards and I couldn’t resist to print and laminate them 😀 You can download the cards here. I’m gonna use them for Go Fish game. I guess everybody knows this game. If don’t here are the rules:

Ss must collect pairs of cards (A plus A, B plus B and so on). Each S holds a few cards. Then he/she asks the person on his/her left side for a letter he needs. The other person must give them this letter card. If the other S hasn’t got that card, they say ‘go fish’ and the previous S draws a card from a pile. The winner is the person who gets rid of all pairs first.

You can also use the Disney cards for playing memory

I printed the alphabet on colourful paper and then laminated. The cards have lasted till today 😉 Each group gets two sets of the alphabet cards (with one additional set of vowels). T shows a FC, Ss must make a word from the letters. The first team gets a point. I always give 3 points for the first team, 2 for the second and one for the third.

Alternative: Ss can use stamps to make words.

Ss work in pairs. One S spells a word from behind and the other S writes it down. The task is to guess the word as quickly as possible.

Ss stay in two rows. T shows the FC to one team. Ss in this team must spell the word giving the letters one by one. Let’s say they have to spell “garden”. !st person says G, and A, third R and so on. I measure their time and then gives another word for another team. The team with better time gets a point.

You can use these cute fish-letters for this game, or if you want just like me save some colour ink, you can use these these colouring pages and print them on colourful paper and then laminate.

To make a rod you need only a stick (I used the stick for baloons), a piece of string, magnet, paper clip and some blu-tack. Combine everything and tadam! You have a beautiful rod 🙂

You can use these cards as puzzles or as I will – as a classroom project.

Each S receives one or two letters. They stick it to a colourful piece of paper. Then They match words with pictures. You can also prepare words with missing letters to complete. 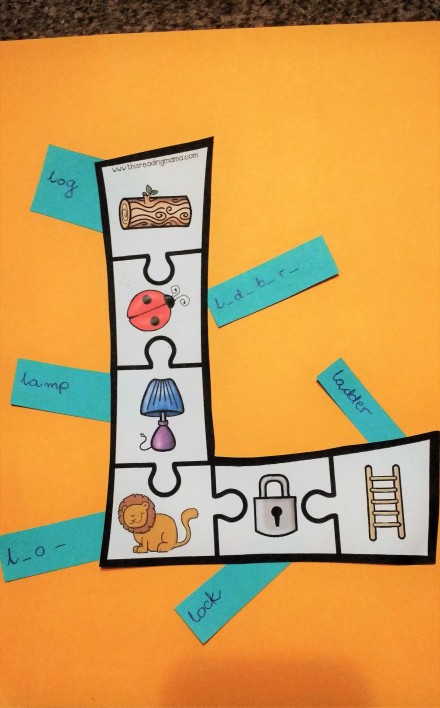 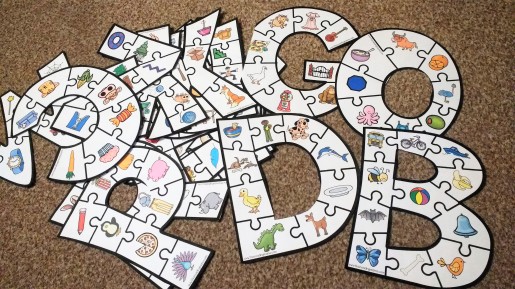 If you have time or want to give creative homework to do you can ask your Ss to make Letter Crafts. There are plenty of ideas on the Internet. Here you can find and example.

I bought these toy letters in Tesco for 11.50 zł. 🙂 I think I’m gonna ask my Ss close their eyes and choose one letter to name it. 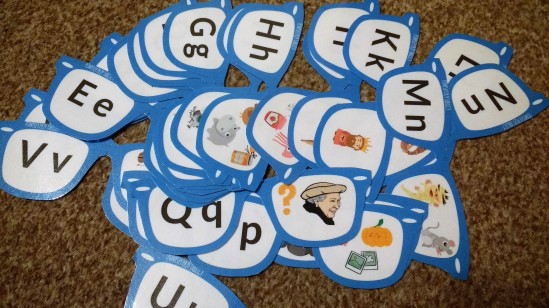 The idea comes from this post and there are all the instructions.

Older students know some popular abbreverations that they can associate when struggling with spelling. Here are some examples:

I – point your finger at your chest 🙂

I’ll be glad if you share your ideas in comments 🙂